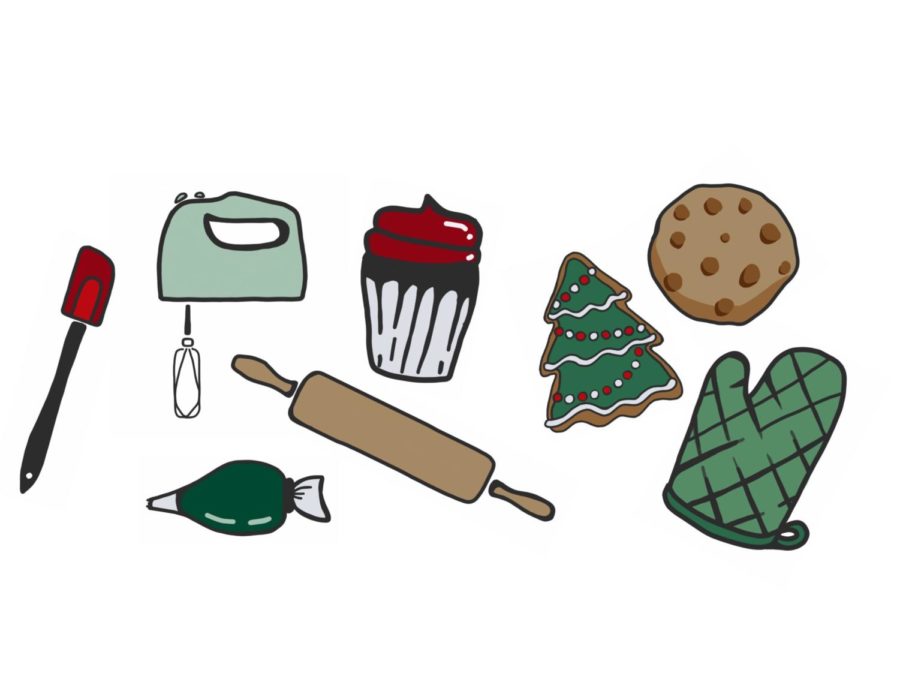 With winter break just a few days away, students will have more time on their hands. How should you fill your time? You might find a new hobby, catch up on sleep, spend time with family, or eat delicious food. A safe bet is always watching a good holiday show, especially a baking holiday show. I watched the latest seasons of “The Great British Baking Show: Holidays”, “Sugar Rush Christmas”, and “Nailed It! Holiday!”.

“The Great British Baking Show: Holidays” called back four bakers from previous seasons each episode. They competed in three challenges to decide who was the star baker: the Signature, the Technical, and the Showstopper. The Signature is the first challenge in the competition. The bakers are able to practice this at home prior to the competition. Next comes the Technical; bakers are asked by one of the judges, Paul Hollywood and Prue Leith, to follow a set of instructions to create specific identical desserts. Finally, it’s the Showstopper. In this challenge, bakers create a large and intricate dessert that will impress the judges. “The Great British Baking Show: Holidays” was a great show overall. The hosts, Noel Fielding and Matt Lucas made the show fun and I never wanted to turn it off. It was nice to see some favorites back in the tent like Ruby, a season 9 finalist and Rahul, the season 9 winner. I liked how it was a smaller competition, with just one episode to see who won. Even though the show was filmed in May, they pretended it was the holiday season. And at the end of the episode, you had to guess they were sweating wearing those coats and scarves. I didn’t know what any of the desserts were because they were all British, but the show did a good job of describing them. And, of course, their accents were always great to hear.

“Sugar Rush Christmas” has four pairs who compete in three rounds. Round one is cupcakes, round two confections, and round three cakes. It is hosted by Hunter March and judged by Candace Nelson and Adriano Zumbo with a guest host each episode. Their slogan is, “The baking competition where time is the most important ingredient.” As soon as the bakers are finished with their desserts, they hit a buzzer to get judged. Then, they move on to the next challenge. After all four teams are judged, one team is eliminated. This show was not my favorite because it was a little too intense and chaotic for me. Watching it for the first time, it was hard to follow. I felt like it had a lot of elements on top of each other. It had a good concept but not a great execution.

“Nailed It! Holiday!” is hosted by Nicole Byer and judged by Jacques Torres with another guest judge. It’s “the baking competition show that wants to be full of glee, but ends up getting totally scrooged,” said Byer. Three amateur bakers compete in two rounds to recreate professional desserts: the “Baker’s Choice” round and the “Nail It! or Fail It” round. Byer was a funny host and added some needed flavor. The competitors never recreated the desserts in a remotely good way. I feel like this is more of a reality show than an actual baking competition. The show was very loud and sometimes disappointing that we never see the desserts come out looking like the original model. If you’re looking to laugh at some amateur bakers, this is a good show.

Baking shows are a nice way to relax and watch people make mistakes that you totally wouldn’t make if you were on the show. I loved “The Great British Baking Show: Holidays”. The other 2 shows were still good, just not my style. If you’re looking for a nice baking show to lean back and relax with, you can watch all these shows on Netflix.