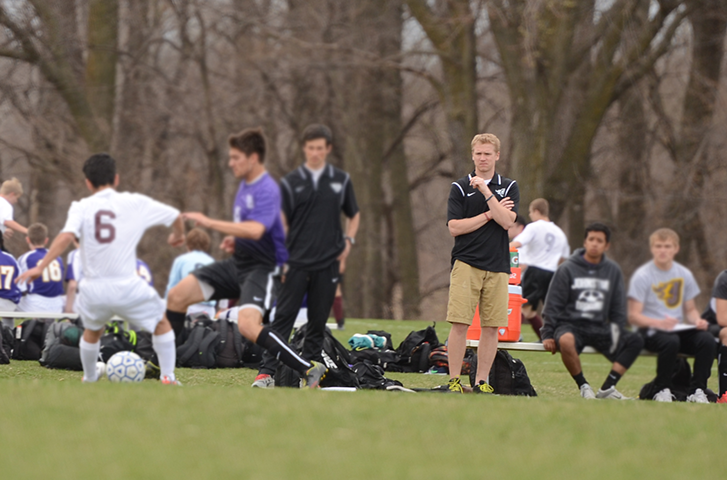 This story contains graphic descriptions of sexual contact, including sexual assault, and can potentially be upsetting for some readers.

After being placed on paid administrative leave beginning Jan. 18, an arrest warrant was issued for science teacher and assistant boys’ soccer coach Dustin Mead March 6. Mead was charged with sexual abuse in the third degree, which is a class “C” felony, as well as sexual exploitation by a school employee, a class “D” felony.

Johnston Police Department Lieutenant Tyler Tompkins told The Des Moines Register that Mead turned himself in to police after being advised by his legal counsel to do so. This is not uncommon. When a criminal complaint is filed by the county attorney, an arrest warrant is issued. The person can arrange to turn themselves in, or law enforcement officers can seek out and arrest the person. “That doesn’t mean a defendant is admitting guilt, that just means the defendant knows there’s a warrant out for his arrest and he’s choosing to turn himself into law enforcement as opposed to the law enforcement seeking him out to execute the arrest warrant,” attorney Luke Craven said. Craven was contacted for this story to provide insight on the legal process.  He is not, however, part of Mead’s legal team, nor does he have access to classified evidence, only what is available as public records.  Craven made no comments as to the merits of the prosecution or the defense case.

Tompkins told The Des Moines Register that the investigation stemmed from allegations brought forth by school district officials. Tompkins also said the case involves multiple victims, however only one victim is listed in court documents currently available to the public.

As it is still an ongoing investigation, many parts of court documents are classified such as witness testimony or any other evidence. However, to charge the person being accused, called the defendant, an investigating police officer must submit facts they believe to be true that support why the defendant may be guilty, called the criminal complaint. This information is a public record. Johnston Police Officer Ryan Hanssen wrote in the complaint the alleged facts for sexual exploitation by a school employee. “Throughout the course of the 2015-2016 school year, the defendant (Mead) reportedly provided the victim with grades that she had not earned, made inappropriate sexual comments to the student, touched the student’s clothed upper inner thigh, grabbed the student’s buttocks over her clothing, kissed the student and digitally penetrated the student without her consent,” he wrote.

The criminal complaint states that these incidents all allegedly occurred inside of the high school in a pattern of conduct done for the purpose of arousing or satisfying Mead’s sexual desires. Mead was the victim’s anatomy teacher.

The details for third degree sexual abuse are more graphic. “During the second semester of the 2015-2016 school year, the defendant did digitally penetrate the victim’s vagina without her consent,” Hanssen wrote. “This incident reportedly occurred inside of the Johnston High School. The victim described freezing up during the incident and not knowing what to do.”

A no-contact order was issued March 7 for all minors excluding Mead’s children and the victim until further notice of the court, the case is dismissed or a sentencing occurs.

When news broke of Mead’s arrest, many students were upset. “I was initially really shocked because I didn’t think that he was like that,” Libbie Smith ‘18 said. Smith was in Mead’s advisory class. “When I found out I honestly couldn’t believe it for a little bit. It was a huge shock to me.”

As both charges are criminal, the trial process began when he was arrested and will continue at the same time as the investigation does.

After a person is arrested, usually within 24 hours they will appear before a judge to determine if bail should be set. “Bail is typically set for a certain amount of money and an agreement by the defendant that the defendant will show up at the designated time that the court says the defendant needs to be in court,” Craven said. “If the defendant doesn’t show up, or violates any other conditions of the bail set by the judge, then another warrant will be issued for the defendant’s arrest.”

Court records show that Mead’s bail was set at $50,000 for both charges and $100,000 total. Mead paid $10,000 through a bail bond company March 8. “Right now it appears that he is out on bail, which basically means that he’s not in jail,” Craven said. “He’s not in custody, and he agrees to show up to court when he needs to show up to court.”

Because the preliminary hearing was waived, an arraignment was set for April 21. An arraignment is the first formal opportunity that the defendant has to respond to the criminal charge in the form of entering a plea, or whether or not they admit or deny committing the alleged crime. Usually, defendants enter a plea of not guilty. There are two ways an arraignment can happen. There is a form that the defendant can fill out and sign, or they can appear in court in front of a judge. “They will essentially say to the judge ‘I’ve been charged in my true and correct name, and I choose to plead ‘blank,’” Craven said.

Meanwhile, the Johnston Police Department is still investigating. Students in Mead’s classes were sent subpoenas by mail stating that the police wished to access students’ records to see which female students were in Mead’s classes. “It felt a lot more real on levels of their involving authorities,” Smith said. “At first when you hear rumors going around school at first you’re like, ‘this isn’t really viable, I can’t believe this right now,’ but when they’re getting officials involved it feels a lot more like it’s actually happening.”

Due to all citizens’ right to a speedy trial, Mead has 90 days in which to be tried from the date of indictment or the day the prosecution files what is referred to as the trial information. However, this is unlikely to happen. “The defense needs time to analyze all that evidence, to talk to all the witnesses and to take depositions,” Craven said. “[A deposition] is where you ask questions to the prosecuting attorney’s witnesses or fact witnesses and that typically requires a lot more time than 90 days.”

There are a few situations in which Mead might not actually go to a jury trial. The prosecution and defendant could agree on a plea deal that is approved by the judge, or it is possible to waive the right to a jury trial and instead be tried in front of one judge. However, many times a defendant will demand a jury trial because it is sometimes viewed as more beneficial to a defendant because, to convict a defendant in a criminal case, all jurors must unanimously find the defendant guilty beyond a reasonable doubt.  This is why jury trials are often chosen by a defendant. “In some cases, due to the nature of the criminal charges, it would definitely be a consideration for a defendant as to whether he or she wants to have the case tried in front of a jury or the bench, depending upon how he or she believes the case would be viewed by a jury,” Craven said.

Mead was charged with two different levels of felony, which have different maximum jail time or fines. There are various levels of crime in Iowa. The least severe are simple misdemeanors such as traffic violations, then serious misdemeanors and aggravated misdemeanors. Then, there are felonies classes “A” through “D.” The lowest felony class is class “D” felony, while class “A” felony is the most severe, such as murder or offenses that are punishable by up to life in prison.

If Mead goes to trial, and is found guilty of both charges, the sentencing is just as unpredictable. There could be a plea arrangement, or the judge would have to make a decision on how long the prison sentence would be for each charge, and whether to run the sentences concurrently or consecutively. Concurrently, he serves time for both sentences at the same time. If served consecutively, then he serves one charge, then the other charge. “That’s not real common, usually they’ll run in concurrently and there’s no guarantee a defendant would be sentenced to the entire duration anyway,” Craven said. “In addition to that, a defendant would most likely be granted parole at a certain period short of the five or ten years.”

The entire investigation and trial may take more than a year. During this time, Smith thinks it is good for students to help each other process information. “I think it’s important for students to talk about it,” she said. “Not necessarily in the rumor sense, but just to understand what’s going on because when something like this happens it’s just an interruption to your normal life.”

She also believes it is necessary for students to not spread false information. “There’s definitely crazy things that people have been saying,” she said. “It’s important to just remember that you don’t know anything that happened unless you were involved.”

Executive Director of Human Resources Laura Kacer was unable to comment as it is an open investigation. “I can confirm that Mr. Mead continues to be on paid administrative leave and we are cooperating with the investigation,” she said in an e-mail. “Matters like this are difficult to discuss because of the need to keep a person’s personnel matters private.”

This is not the first time a Johnston teacher was arrested on sex abuse charges. Former Summit Middle School teacher Steven Williams was convicted in 2012 after sending sexually explicit messages to a student he believed was 14 years old, but was actually an undercover Clinton County Sheriff.