A field full of boys, yet long blond hair stands out among them. 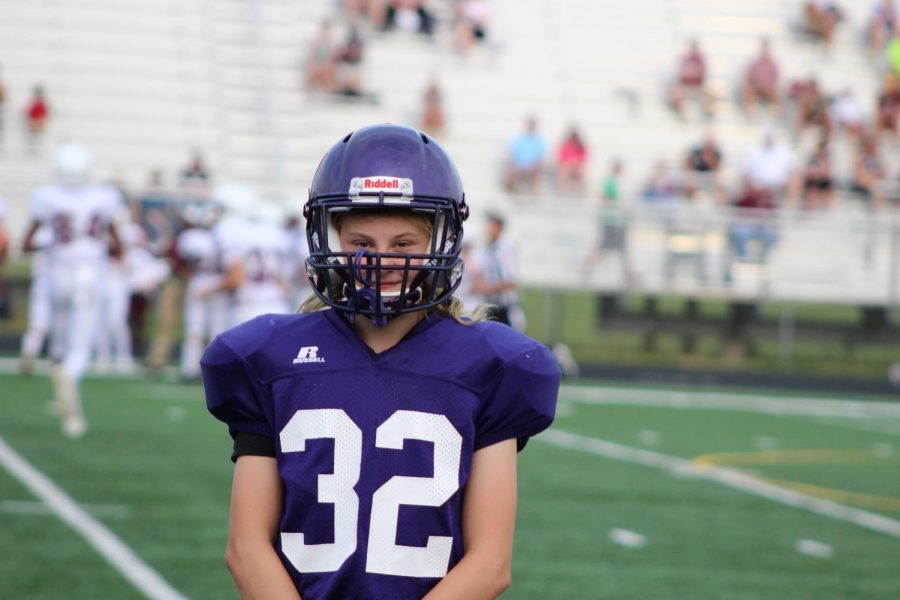 When someone hears the word ‘football’, they usually think roaring crowds in towering stands and boys of all ages racing around on a field in a full contact sport, competing to see who can get further with the ball to make a touchdown. Boys usually dominate the field, so the moment someone realizes a girl is out there as well, everyone’s interest is suddenly piqued. Girls are not exactly expected to do full contact sports like football, yet more girls than ever before are joining and making headlines.

Lily Martin ’23 is active in many sports, such as soccer, alongside football. She has been playing football since sixth grade and has loved the game ever since. She started off as a safety at the beginning of the football season, but transferred to a wide receiver. “I wanted to be a wide receiver because it was popular to play and it was a position that was easy to learn football from,” Martin said.

Even though Martin has played football for three years she still gets negative comments from other players about being on the football team. “Sometimes some of the boys would just make weird comments and it was not purposely trying to be offensive, but sometimes it was a little bit harsh,” Martin said. Despite this, Martin ignores the negative comments and thinks about the positive sides of playing football. “I really like sports,” Martin said. “If I did not do football, I just would not have anything to do. It is really fun and I definitely feel more fit [because of it].”

The other players on the team did not really know what to think when a girl joined the team. “They really didn’t talk to me because, you know, it is different having a girl on the team, but as time went by, they got used to it,” Martin said. Her fellow players pretty much treated her like everybody else. Yet when it comes to other schools coming onto the field with Martin, they generally do not notice her gender until her helmet is off. “They really don’t notice I’m a girl, until after the game when we high five. And there is always that one person in the front that will skip me,” Martin said. Martin is not offended by this, rather she thinks it is funny.

Another aspect of being the only girl on the team is the treatment that Martin receives from the coach. “He treats me pretty much the same, but he made sure that it is known that if I need to come to him with anything, that is completely fine,” Martin said.

Martin’s social life has definitely changed, but for the better. “I feel like I have been able to make more friends because I can connect with them better,” Martin said. “My range of friends broadened. My friends used to consist of only girls and a few guy friends. But I now have more guy friends. Guys definitely feel more comfortable with talking to me, because they have practice with me everyday. They have something in common with me.