The Physical Education Department is changing, which will be… wack 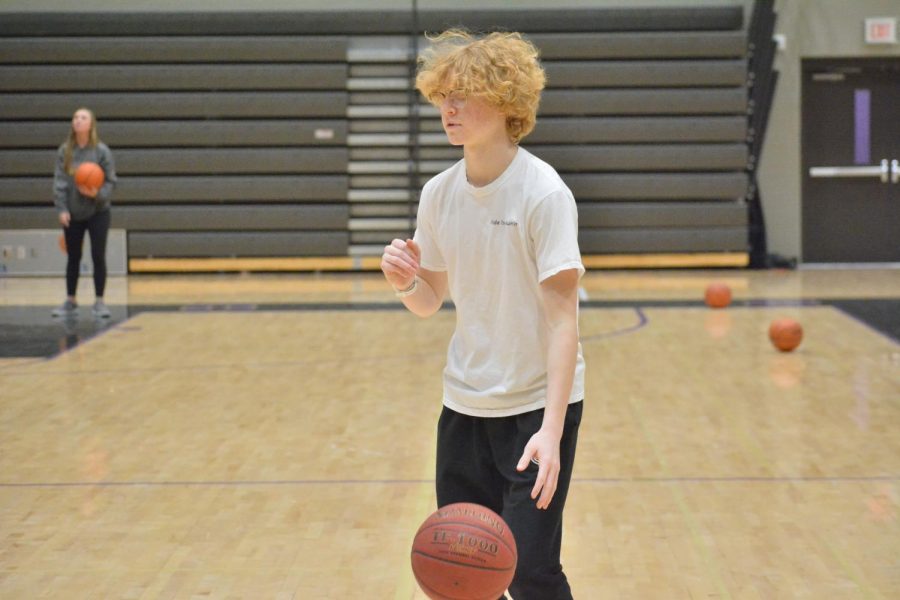 Eli Erikson '20 plays basketball in Track 3 PE. Currently PE meets every other day. The proposal is for it to meet every day for one semester.

There are changes coming to the high school: Standards based grading, Sophomores potentially getting open campus and lastly there is a movement going from the P.E. Department to restructure how P.E. classes fit into schedules.

Physical Education Teacher Brian Lutter introduced one of the proposals, “Currently, students receive one semester of P.E. spread out over an entire academic year.” Lutter said. “By condensing down P.E. to one semester, students will still get the same amount of P.E.“

That would also open up opportunities for students to take other classes that they would not otherwise be able to because P.E., along with choir, Extended Learning Program and Peer Art are the only classes that operate on an A-day, B-day. If a student wanted to take photography, for example, they might not be able to take it currently, since photography is not offered A/B, and if they can not fit photography in with P.E. they would miss out. Now, if the student took P.E. in the fall semester, they would have a chance to take photography, because P.E would not be required in the spring.

There are some requirements outlined in the educational code which require the waiver to explain how the students would get the same amount of P.E. “Chapter 12 of the Iowa Code states that students must be enrolled in P.E. each semester for a minimum 900 minutes each semester,” Lutter said. “The new proposal would block P.E., so students would take 90 minutes of P.E. every day instead of 45 minutes every other day.”

However, this proposal is still just that and has a few steps to follow before it can come into effect. It has already overcome a few as well, specifically passing the school board. “In order for this proposal to pass, it had to go to the school board, and they have to approve the change,” Lutter said. “We have to apply for a waiver from the State Department of Education. Because students wouldn’t be taking P.E. each semester with this proposal, the department of Ed would give us a waiver saying that students are still meeting the requirements they need for Physical Education in the state of Iowa, we’re just delivering P.E. differently than what’s outlined in the state code.”

This has other benefits, not all of which are schedule related. “Well, obviously, there’d be more frequent time to get to students on a personal level, but also on an academic level,” Lutter said. ”The better that we know our students, the better that we can help you. Ideally, at least in Track 4, I want to give students the knowledge and experience to design strength training and other workouts that they can then take with them, beyond high school to continue to live a healthy, active lifestyle.”

Students, for the most part, like the proposal for the reasons outlined above. One of the students who would like to see the proposal go into effect is Matthew McClantic, ‘21. “I think it’s better, because then, you don’t have to take P.E. another semester, and you get a better workout one day instead of only like 30 minutes or something,” McClantic said.

Ines Elkaz, ’21, has a different opinion.  “To be honest, I don’t really like them, I’d rather just keep [P.E], as it is currently, where we can be exempt from one semester, but we have to have at least one semester of P.E every year,” Elkaz said. “Because, some of us do have a full academic schedule, we torture ourselves with that, and we like the option of having only one semester of P.E.”

One person who has a full academic schedule is John Harrington ‘21. “I think it could be more efficient,” Harrington said. “I can see where they’re coming from… However for me, I really am trying to squeeze in as many credits as possible, so having that one semester be excused is going to bump at least one of my credits.”

Nothing is set in stone yet, but with students coming down on either side of the issue and faculty pulling for the changes, it seems likely that the new plan will be put into place, which will be… wack.