The Problem with Holidays

At the surface, holidays are wonderful. However, the further you dig into the idea of holidays, the more problems can arise.

Holidays are great. They are a time to celebrate and revel in the festivities occurring all around. By definition, no work is done on a holiday and to a high school student, virtually nothing could be better than having permission from the United States of America to be unproductive.

It was this mindset that I embraced last weekend. On a freezing Saturday at a family friend’s house, I watched fireworks go off and heard children screaming with delight. Shouts of “Happy Diwali!” echoed all around me and the pride in my heart grew tenfold. And yet, I was not completely satisfied. While the Indian families around me knew the significance of the day, I could not help but wonder what the neighbors thought of our celebrations. I was sure that they did not know what we were celebrating, much less why we were celebrating on a random Saturday.

Diwali is the Hindu equivalent to the Christian Christmas, and yet, not many know about it. Not one word of discussion was spoken about Diwali at school by any teacher or administrator and I can venture to say that 99% of the student body at Johnston has no knowledge of what Diwali is. Instead, the focus is placed on other holidays like Columbus Day and National Cheese Day. (I am not joking. Someone in my English class was actually celebrating National Cheese Day.)

This gap in knowledge of important holidays begs a few questions. Why don’t more students know about Diwali? Why are some holidays so widely celebrated? Why are other holidays largely ignored?  Who indirectly decides what we celebrate at school?

A question has arisen fairly recently on the issue of controversial holidays. Specifically, why do we continue celebrating controversial holidays? For example, Columbus Day and Christopher Columbus himself have been celebrated for centuries, but Columbus’ more problematic past have now come to light. In our history books, Columbus is credited with “discovering” America and setting up an important trade route across the globe. Yet, he is also credited with destroying the livelihoods of the Native American population already residing in North America and setting the cycle of slavery in motion, the impacts of which we as a society still feel today with racism and lingering microaggressions. “I think Columbus Day is ridiculous,” Gillian Maring ’21 said. “I don’t get it.”

The issue of controversial holidays becomes one that spans multiple topics: religion, politics, history, and social understanding of one another. By actively celebrating holidays like Columbus Day, we allow figures like Christopher Columbus to remain prevalent. More importantly, we allow his negative legacy to remain as well. His legacy continues to subtly impact the way we view history and how we view each other, and that can be problematic.

However, to a certain degree, the holidays we celebrate serve as a historical record. While the impacts we currently see might be less than ideal, the reason for those impacts can be traced through history. Take Halloween as an example. Halloween has impacted our modern economy by pushing consumers to buy costumes, candy, pumpkins, and decorations. (Halloween also boosts the dental industry by gifting dentists cavity-filled children to operate on.) But Halloween initially began as a Celtic festival that marked the end of harvest and the beginning of winter. The ancient Celts built giant bonfires and burned crops as sacrifices to their deities in order to ensure a plentiful winter. Clearly, much has changed. Over the years, Halloween was influenced by Christianity, which is where the idea of dressing up in costumes entered the celebrations. As Halloween made its way to America, the religious aspect of the holiday diluted until it became a celebration for children to receive treats.

Having a record of a holiday to look back on is a beneficial tool for new generations. The only issue is that new holidays need to be introduced. Holidays like Diwali, Chinese New Year, Hanukkah, Kwanzaa, and Ramadan are seldom talked about at school, and as a result students don’t look back on the origins of these holidays or even the modern-day implications of them. These holidays should not be left as an afterthought for the American education system and should begin to be looked at as priorities.

The decision for which holidays are indirectly recognized by the school district comes from a committee of people, consisting of students, parents, and teachers. “We have to keep in mind Iowa code, requirements on when we can start school, and the minimum number of hours,” superintendent Laura Kacer said. “The other piece we need to keep in mind is our contract with our employee groups.” 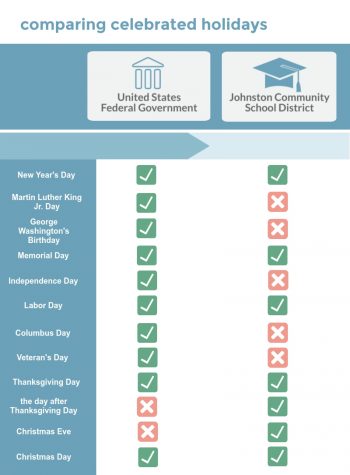 The contract itself does not say much about how ethnic holidays should be considered in the context of school vacations/breaks. This is largely in part to staying with how the Board has always decided breaks. “If there’s a large population of who celebrates that holiday, it’d be more difficult to take [holidays] off the calendar,” Maring said. It’s understandable that celebrated and recognized holidays at school are centered around the majority of the student body’s celebrated holidays; however, new holidays need awareness as well to represent the underrepresented at school. Such a change would be beneficial for minority demographics at school. Students like Maryam Mohammed ’21 would make use of the newly recognized holidays. “I celebrate Eid and we have to go to prayer in the morning and missing school for that is kind of a pain,” Mohammed said. “I do wish we had breaks, but I understand it.”

At a school like Johnston, we’re privileged to have the resources and opportunities we have. But on certain matters, like holidays, those opportunities seem to revolve only around one certain demographic. In order to be inclusive and spread knowledge of global traditions, we should look to educating our student body on other holidays. If not designating specific days for holidays like Diwali and Eid, admin should at least make the effort to inform students of the occasion.

In the same way that Christopher Columbus’ narrative shifted to reflect his entire story, the system that dictates what holidays we celebrate should shift as well. Only then, we can embrace all the good of holidays.