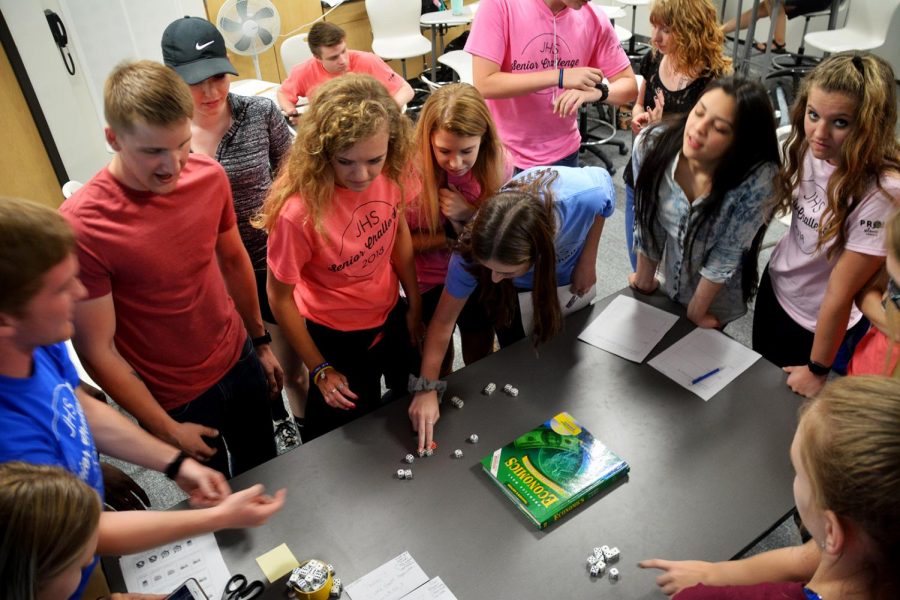 Sector six is counting up their dice to see if they won the war against sector one.

Erin Lamberty ‘18 and Darrick Beckman ’18 were strategizing to try to come up with a way to keep their country afloat after it was hit by a hurricane. “Every round we get hit by something bad and we lose a lot of resources and we are India so we need a lot of resources,” Lamberty said.

Lamberty and Beckman were trading money for lumber durning the last day of their Economics virtual world simulation.  Economics teacher Sarah Hottle came up with the idea to have a virtual world simulation for her last unit of the year. “With it being the end of the year I figured the seniors need to be up, moving and engaged because [the seniors] are kind of over the whole listening to lectures, watching videos type of stuff,” Hottle said. “I tried to come up with something that would be fun and engaging for both me and the students.” She came up with the idea after she did something very similar at her old school and modified it to work for her Economics class.

The last unit for Hottle’s Economics class is the global economy. Students are learning about not only the economy in the United States but also the economy around the world.  Hottle decided to turn her class into the global economy. She split up her class into sectors, each class period has eight different sectors. The sectors represented all different parts of the world, and each group had to do research of the sector they had before the game could start. “They had to research the population, their GDP, they had to calculate the GDP per capita, what the dominant religion was, and they had to do the literacy rate,” Hottle said.

After researching their sector the students then had to decide how they wanted it to run. They had to decide what type of government system, a economic system, a new name and capital and what was most important to them resources wise. They had to figure out what their nation’s priorities are and what resources were most important to them to survive.

In the game, they had instances where two sectors would go to war against each other. War in the game was rolling dice against the other team and whoever had the highest total won the war. Just like in the real world, the game also had allies, so when one sector went to war so did all of their allies. “We were allies with sector number one and they went in to war with sector six.” Samantha Goodman ‘18 said, “[Sector six] had a lot more dice than we did so when we were rolling with them they could add up a bigger total and that took a hit on us and we lost, so we lost a lot of our resources.”

All the events that happened to the sectors was completely at random, Hottle would roll a dice and the event would hit the sector. The game was a good way for students to get involved and learn about the global economy in a very realistic way. “It’s kind of intense and confusing at times but it’s fun to get away from stuff in the textbook,” Goodman said.