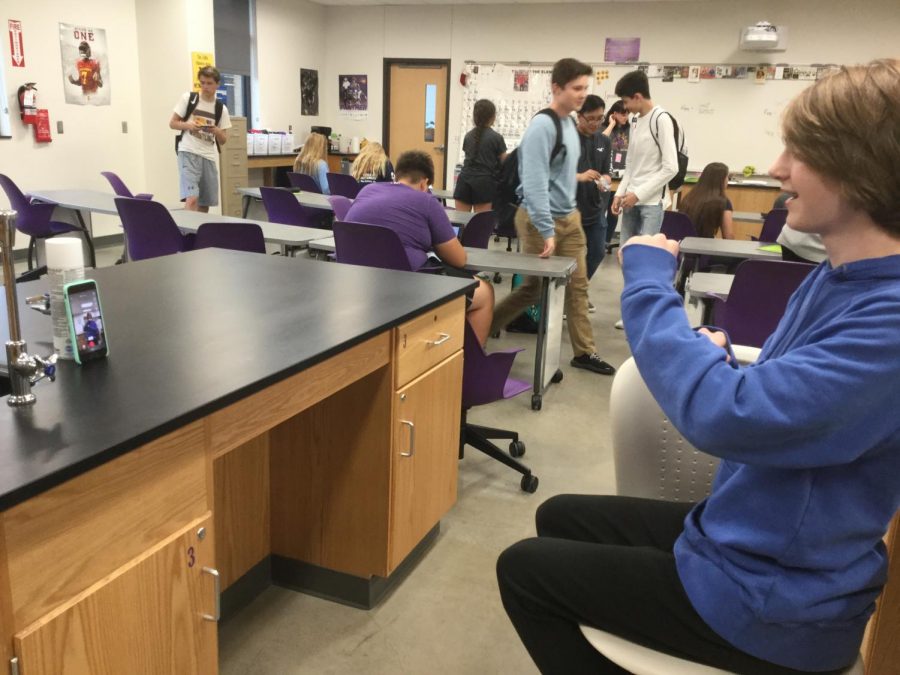 Cole Palmisano '21 making a TikTok of him hitting the '"woah" during Lehman's fifth hour chemistry class. Students will make TikToks in any class at any time of the day.

Last August, a company called ByteDance bought over the very popular app, Musical.ly. The app was for videos of mainly lip-singing but was also a creative outlet for everyone. As musical.ly, a lot of people looked down on the app. They saw it as cringe, and for teenage girls only, but now that it is TikTok, people see it as a fun app. Almost like Vine 2.0.

New trends have come up through TikTok, and it is how Lil Nas X got “Old Town Road” to become a meme. People have gotten hundreds and thousands of followers from posting a simple video of them dancing or acting. “I like using TikTok because I think the dance trends are really fun and when people mess them up they are really funny,” Wendy Avalos ’21 said.

A lot of students, and now teachers, have been using TikTok as a creative outlet. There is this new trend going around the app where students will hit the woah, a new dance move, and move out of the screen and their teacher will be hitting the woah next. It is a very common thing for students to do in the classroom. “I do not mind it, I actually think it is really funny,” Avalos said. “It can obviously be distracting during a lesson or something, but I enjoy them.”

Some students do not feel so comfortable with their classmates making TikTok’s. “I hate everything about it,” Ashley Smith ’21 said. “I believe it is disrespectful to teachers and other students. I have seen a lot of people recording people for TikTok’s without their consent and I would consider it bullying. There was a trend going around about baseball boys on TikTok versus boys at my school, and this girl in my grade did one and recorded many boys without their consent and if teachers or parents found it they would be very disappointed.”

One student who really enjoys her time on TikTok is Jordyn Cimmiyotti ‘21. She has been making TikToks since it was musical.ly. “TikToks are very fun to make, and they are kind of like an expression to me,” Cimmiyotti said. “I get to express my opinions and feelings without really being judged by others. To me, making them is something that I just really enjoy.”

The app recently added a feature where you can add filters to the video to change someone’s appearance. Having this feature makes most of the videos funnier, with a different presence to the average TikTok. “The filters on TikTok just add to it being funny depending on how the user apply them to their videos,” Avalos said.

In the end, TikTok is innovative and creative, and whether anyone wants this app to become huge to Johnston or not, it will because of its popularity with teens. “They are very entertaining,” Avalos said. “Plus, since they are just quick little videos so you can watch them when you are bored or while you are waiting for the bus.”