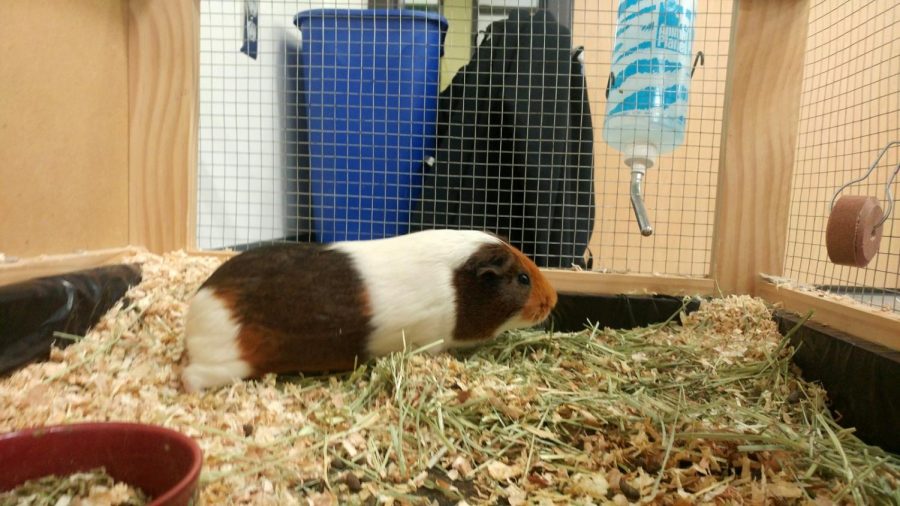 One of the remaining guinea pigs sits in his cage. Penelope the guinea pig likely passed away due to separation.

Tabitha Doherty 18′ walked into the A.P. Environmental Science room and was surprised by science teacher Kyla Burns’s reaction when they met eyes. “What?” Burns said, looking around as half of the class surrounded the front half of the classroom.

All the students had similar reactions to her appearance, some were nervous laughing, others had wandered away from the front, to avoid eye contact with her. “Tabitha, I don’t know what happened but Penelope died,” Burns said as the class waited for her response.

The class continued as Doherty and Burns talked about what to do with the deceased guinea pig and the lesson began.

Last December, Doherty asked if Burns could take Penelope to the science departments chaotic but loving home. “I chose to bring her into the classroom because this past December I got a puppy and guinea pigs eat hay,” Doherty said. “Penelope would kick the hay out of her pen and the puppy would eat it, so out of safety for the pup and respect of Penelope I asked Burns if she could take her,”

Doherty knew that Penelope would be happy getting interactions from not only humans but other animals as well.

Doherty says that could be the cause of Penelope’s early death. Guinea pigs’s lifespans are projected to be four to eight years and Penelope was just over two years old. “Guinea pigs are very social animals,” Doherty said. “When Penelope and Ollie separated it probably caused Penelope to have depressive symptoms. The move from the house to a hectic classroom had also probably taken a toll on her as changing environments can be stressful to any animal.”

Burns and Tabitha are still deciding what to do with the carcass of Penelope. “Either way we are burying her,” Doherty said. “We might let her decompose to try and see her skeleton or just burying her the way she is now.”