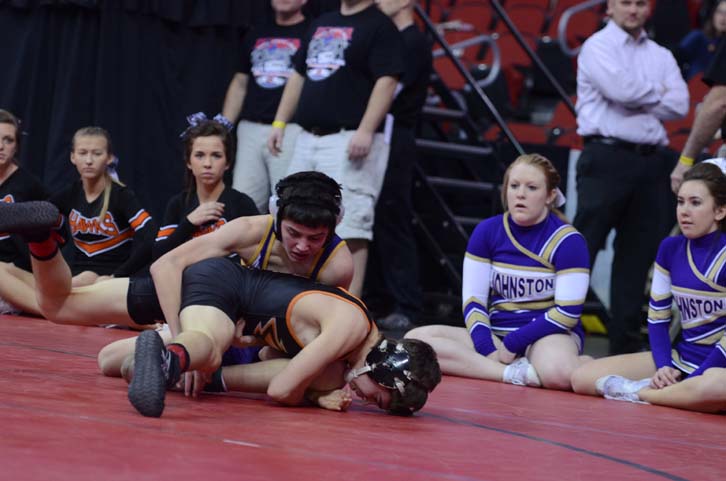 Looking back at the season, head coach Aaron Tecklenburg thinks the team competed well and improved throughout the season. The wrestlers always try to peak the week of districts and state and for the most part, they did this season.

Pohlmeyer would have preferred to win his weight division, following his win at 106 lbs in 2013, but he did not feel like he was at 100% during the finals. Weight management leading into the finals was no easy task for Pohlmeyer. He spent much of his time the day and early morning before weigh-in for finals running on a treadmill to meet his weight.

“It was a good time while I was wrestling, but I think weight management kind of caught up to me,” Pohlmeyer said. “I felt very weak (during the finals), I was drained of energy, really had nothing left.”

No season or tournament ever goes perfectly for a team. Some disappointments were present at the state tournament.

“We felt like competition was tough and we were able to compete,” Tecklenburg said.

Goals of the wrestlers going into districts and state ranged from making it to the state meet to winning a title. Tecklenburg was impressed with the way the team improved and competed throughout the season.

“Getting two of our guys on the podium was a nice accomplishment for our team,” Tecklenburg said. “We expect even greater things next season.”

The season is now over, but preparations for next year are already under way with the season starting the day after finals. Four days after competing for the state title, Pohlmeyer had been to four practices already, with his eyes set on winning the finals match next year.

“I’m sure eating a lot and packing on some pounds that were lost this season with some weight cuts is also on the agenda,” Tecklenburg said.