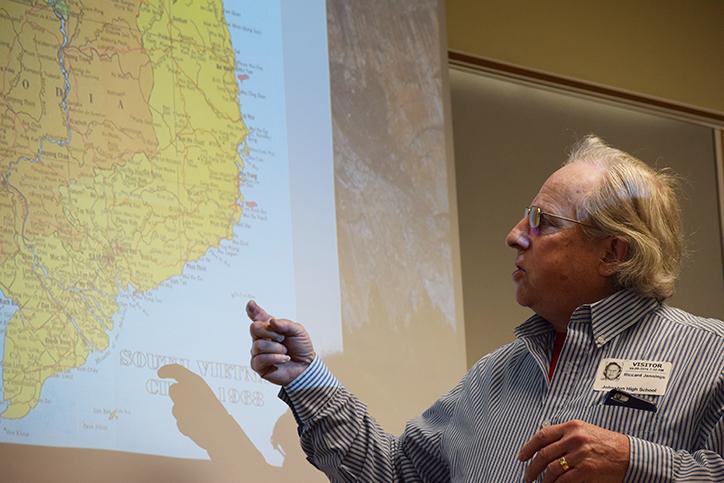 Pointing on the map where he was deployed, Vietnam veteran Rick Jennings gives an in-depth explanation of being in the war. Jennings, accompanied by two other veterans, told their stories to U.S. History classes April 8.

Three Vietnam War veterans visited with juniors in U.S. History classes April 8 to discuss their experiences overseas. The three men discussed living conditions, tracking their way through the terrain and how drastic life was halfway across the world.

Veteran Roger Elliott, who has spoken in years past, served as a Service Engine Repairman and Motor Sergeant in the two terms he served. Elliott described 1968 as one of the most significant years of his life, being that he graduated high school and enlisted in the military all in the same year.

Also serving two terms before being discharged, veteran Rick Jennings served in the Army as a combat engineer. Jennings was there on the ground during the Tet Offensive. “We were nailed down for two weeks,” Jennings said.

Dave Terrell was a Navy veteren, having lived in the submarines off the coast of North Vietnam during the war. He described the lack of space in the bunks where he slept. His group was responsible for getting Navy Seals and Korean Rock Marines into Vietnam. After returning home from the war, Terrell was faced with public anger towards him. He received letters in the mail saying, “Welcome home, baby-killer”. He moved out of Des Moines to avoid the harassment. “They weren’t fighting the war,” Terrell said. “They were fighting the warriors coming home.”