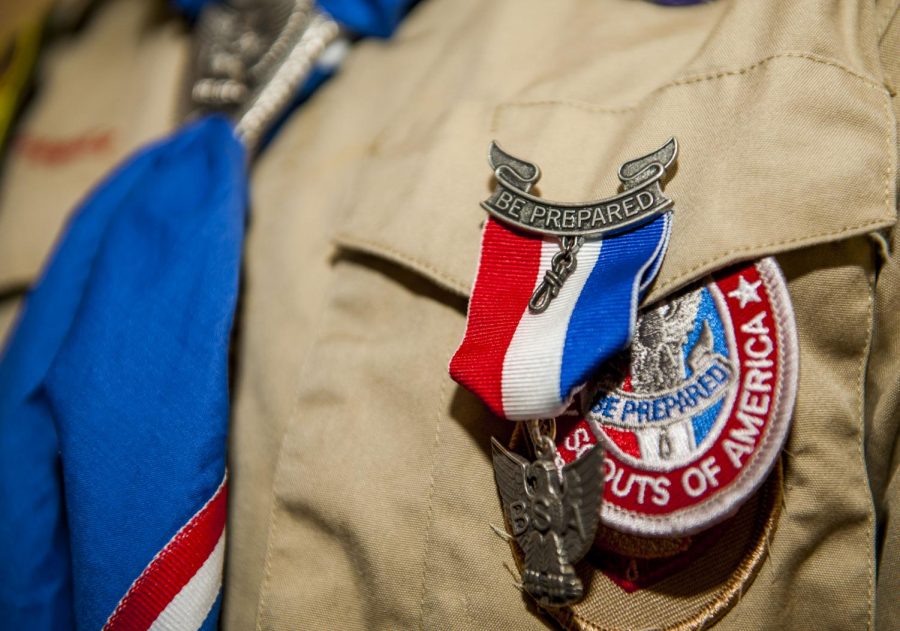 Photo courtesy of Spangleheim Air Base

I am the only disabled Boy Scout I have ever met. I have 44 merit badges, which are little ovals of cloth that denote that the Scout has committed enough time to have, allegedly, learned something. The required amount needed to reach Eagle, the highest rank in Scouts, is 21 total. There are 13 merit badges that are mandatory to reach this rank, and of those, I have 12. If I can defy the odds and do that – while using a walker –  anyone can.

A common misconception is that Boy Scouts is a physically-intensive activity, but it is not. It is an outdoors-intensive fellowship. The only badges that require any kind of physical work would be personal fitness, camping and swimming/hiking/biking. You can get through most of camping just by going on camp-outs and writing the written pieces. Personal fitness is just a half-hour conversation, learning about a job opportunity and education for a career in fitness and writing a paragraph, and two fitness tests (No. It is not the Pacer test). Hiking/biking/swimming is a larger hurdle, but the organization allowed me to substitute the Safety merit badge since I cannot perform the backstroke, bike 50 miles or hike for six hours.

Safety has been a struggle. I created a notebook on safety, including facts, figures and newspaper articles, and I have to do a safety inspection of my home. Cooking is another iffy one, but again, is mostly writing, three trail meals, and a weekend as the cook for your patrol.

That is it. The rest is a whole bunch of visiting, talking to people, and writing. I got four done in one week. Scouts in the audience are going to say that I did that at summer camp, and while this is true, the week I am talking about is the week my troop went to Loud Thunder. I was in the hospital that week, recovering from surgery. The point to this long and slow diatribe is that anyone can amass a ridiculous number of merit badges without really having to lift a mountain or go to France. Summer camp is normally where the Scout earns the most of their elective merit badges, averaging four earned per year, maybe even five, if said scout is focused enough.

Boy Scouts is worth participating in for a couple of reasons. According to the PDF “A hundred Scouts” on BSA.com, 16 percent of all scouts discover a lifelong hobby through the program, and eight percent make it into a career. One of every 100 will use their skills to save someone’s life. Although, of the many scouts that walk the path to Eagle, only two percent make it there. A full half of those Eagles later said they value their Eagle over their college degree. Then comes the camaraderie, too. That two percent stick together.  I have met so many people who have told me (in general,) “I was in Scouts too… If there is anything I can do, just ask.”

The distinction of having your Eagle is also its own reward. One of the staff, Jason Vonderheid, who worked at Theodore Naish Scout Reservation and Summer Camp in Kansas City, put it best three years ago at closing campfire, “I was Valedictorian, or Honor Roll, or the lead in the school play. I am an Eagle Scout…” Vonderheid said.

Scouts is also fun. We went to Hidden Acres, a campground in Dayton, whereupon the first order of business was to go canoeing. The second, was to create Michael America, made of Michael Schmitt and Michael Friedmann’s boats. They ended up tailspinning back to shore, but it was still cool. We went to Camp Lowden last year, and a single table of eight staff, outsang eight troops of 40 or so kids each in several rounds of “Little Red Wagon.”

Scouting does a good job of accommodating. Most of the summer camps (read: all of the ones around Iowa) have some form of Disability/Special Needs campsite where the scout will be paired up with either the scouts home troop if they are small enough, or just a tent-mate or another troop. The Scouts of America are known for making anything work. The showers are almost guaranteed to have power for any kind of electric wheelchair or mobility device. They give the scout more time to get to classes, if given notice before camp, and the nurse is already required to have the medical knowledge for any light/moderate injury anyway, so the scout is fine on that front.

Another common misconception is that the scout will be treated as a lesser person of some kind. This is, for the most part, untrue, as the scout is judged based upon his/her own merits. I am not a very good example of this considering, I have shouted myself to the bottom of the totem pole, with interest.

Boy Scouts is a wide, accepting group full of work-arounds, adaptations, and engagingly challenging activities. There is no walk in the park by any standards, but if taken seriously, or as seriously as a Boy Scout wants to be taken, then the experience will prove to be both rewarding and beneficial, with numerous tangible pay-offs. So, please, join us!