Why virtual substitutes are virtually nonexistent 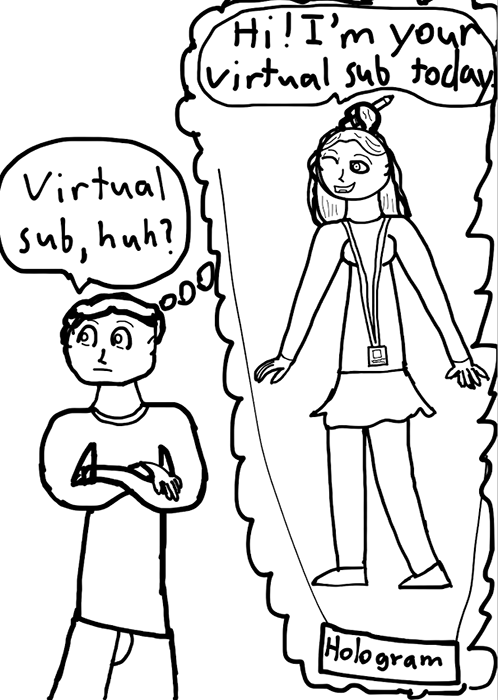 Last year, the virtual substitute was introduced to the high school but has not been used during this semester. Virtual Sub is a program that allows students to get work done through Moodle while the teacher is gone. The students would assign themselves to different areas and get their work done on their own. “If we start it second semester, that would be ideal,” Ryan Woods said. “We are still going to do it, it will just take more time.”

There are two main reasons why the school did not use the virtual substitute program at the beginning of this year; the program was not what the administration wanted and the program needed a different software to work properly. The software that will be purchased is from a school district in Chanhassen, Minnesota, and will cost about $5,000.

“Last year’s pilot was done a little bit different,” Ryan Woods said. “It required one dedicated space for kids to go to with a study hall, monitor type person, but that was never the end goal we wanted; the end goal was about students having the ability to assign themselves to areas of the building where we knew where they were and they could do their work.”

Last year the program got a mixed reception from students.

“I thought it was kind of inefficient in a way, because I felt like I couldn’t get any of my work done, and it was confusing on what I had to do for that class during that time.” Noah Haynes, ’18 said. “I couldn’t ask anybody because nobody knew what they were doing, and the virtual sub just had no clue because she didn’t know anything about the subject.”

Social studies teacher Patrick Hennes was able to use the program last year. The teacher has to assign the work for the class digitally through Moodle or Infinite Campus. “It was pretty good for me to use as a teacher,” Hennes said. “The only difference was using Infinite Campus to email the students to let them know there would be a virtual sub, and what their assignment of the day was to work on.”

Science teacher Sara Howe did the virtual substitute program last year as well and had a good experience. “I really like this virtual sub, and I think the kids liked the virtual sub because it gives them flexibility and freedom,” Howe said. “I didn’t have to worry about students interacting with the sub, which sometimes is really beneficial, and sometimes is not necessarily that beneficial.”

Even though the program will be implemented in the future, teachers will have the choice between using a traditional substitute teacher or the virtual one. “It would depend on what we are doing in class, and if it was a pre-planned absence,” Hennes said. “If it were a pre-planned absence I would be more likely to use an actual sub.”

Brigid Townsend is in her third year of subbing and was a teacher in the district for 17 years. She has concerns about how she will find work and making a connection to students. “There are some days I do not know the content of the classroom, or I might be appearing like I’m just sitting behind my desk while the kids are working, but I’d like to think I have some skills in being able to monitor and keep kids on task,” Townsend said. “I would hate to see that human connection, personally, to go away.”

If the program does not start next semester, the program will be pushed back for next school year. “I will default to the virtual substitute in the future,” Howe said. “A lot of times when I make sub plans, I’m just me writing a letter to the students, anyway, or giving the kids a to-do list, so why wouldn’t I just give that to the kids if it doesn’t need to go through the (traditional) sub?”