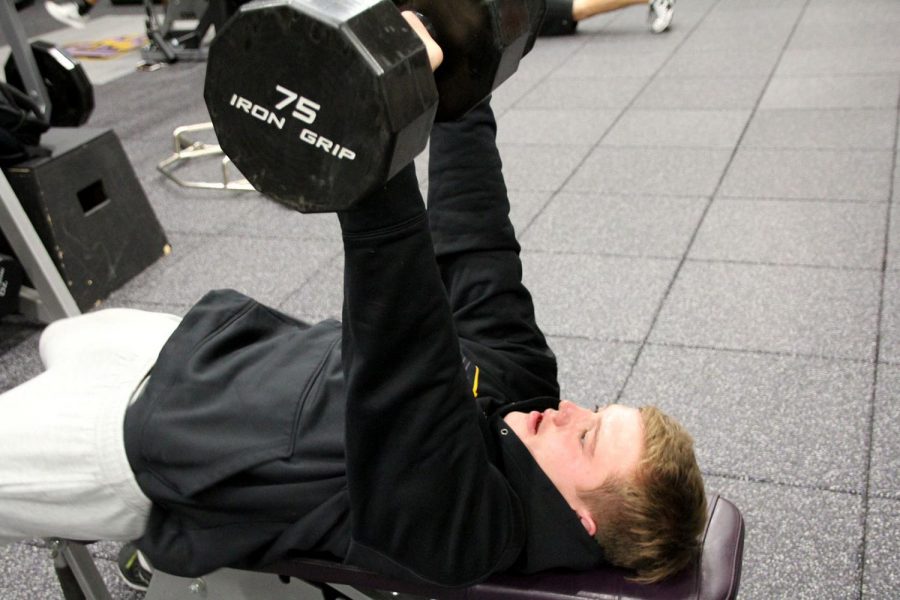 Noah Rogers '18, dumbell presses 75 pounds in each hand. Rogers will be wrestling in the 170 pound division at the Preseason National Tournament on October 28.

Noah Rogers, ’17 will be competing in Cedar Falls at the Preseason Nationals tournament on Oct. 28.  The folkstyle tournament has a double-elimination format, and begins at 9:00 that morning. Since this tournament takes place before the high school wrestling season, the wrestlers have the option to compete under the names of different wrestling clubs, such as the Johnston Wrestling Club, Ubasa Wrestling Academy, Excel Wrestling, Team Porcelli Wrestling, or any other group or club.  Rogers has decided to register with Johnston Wrestling Club.  The competitors also get to choose two people that they would like to coach them on the corner of the mat at the competition. At this point, wrestlers from 32 different states are traveling to compete in this event containing 1500 high school boys. Tickets can be bought at the door for $20.

To prepare for the tournament, Rogers has been working out at least once a day.  In addition to lifting with the team before school three days a week, Rogers goes to his own crossfit gym after school.  He also goes to club practices with the Johnston Wrestling Club, and runs on his own time.  He says that being in shape will be one of the biggest challenges for the competitors in this off-season tournament.  “In the season, you’re wrestling matches on Thursdays and Saturdays so you’re getting a lot of mat time, whereas right now I haven’t wrestled a real match since the summer, so jumping right into that may be a little tougher than what you want it to be,” Rogers said.

However, Rogers is no stranger to wrestling during the off-season.  Over the summer, Rogers wrestled in both freestyle and greco matches, even going to tournaments in both Kansas and Minnesota.

This tournament is not only a chance for wrestlers to show off their skills before the season starts, it is also a way to prepare for the coming high school season.  Rogers believes that this tournament is a great way to figure out what he wants to focus on and improve on in this coming season.  “I think for this tournament it is important to get down to the weight you want to wrestle at this season, so your body can get used to it.  That way when you’re in the season it’s not really a huge surprise when you’re maybe a little sucked down to your weight.”  Rogers said that while he isn’t cutting a whole lot of weight this year, it is very important to focus on nutrition.  His personal goal is to get as many matches as possible, and to see what adjustments he needs to make before this season.  “I think it’s something where you look at the results and you find out what you need to build on, make come changes, and come this season you’re ready to go and be the best you can be,”.