During his junior year, Bernardo Duarte ‘16 first started questioning his sexuality. “I was terrified of that idea so I shut it off completely,” Duarte said. “I would tell myself everyday that I’m not gay to the point where I would believe it.”

After one year, Duarte stopped hiding the truth from himself and accepted that he was gay. 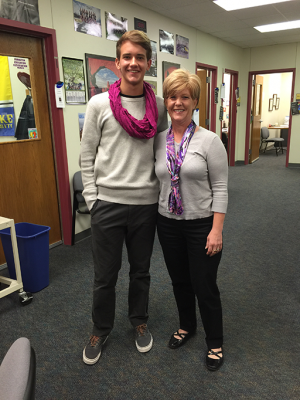 Initially, Duarte only told a single friend, since the topic still made him uncomfortable. “I didn’t even like to talk or think about it,” he said.

It took until the end of summer for Duarte to come out to his parents, who were very accepting. It was not long until he told the person he was going to be rooming with during his upcoming year in college. “I was scared he was going to react negatively to it and not want to room with me anymore,” Duarte said. His roommate was not bothered by Duarte’s sexuality.

Over time, Duarte has become more comfortable with the idea of being open about his sexuality. His close friends know, and he will tell people if it comes up in conversation. “The one thing I didn’t want to do was post about it on social media,” Duarte said. “A lot of people have a first impression of you from what they see on social media. I wouldn’t want them to think differently.”

After receiving input from his friends, Duarte made the decision to post it on social media Feb. 5. “It was not just so I could come out, it was because I was hoping it would in turn help other students in Johnston who are struggling with a similar issue,” Duarte said. Despite his initial reluctance to come out on social media, Duarte felt that his tweet was worth it after several people replied with their support and stories.

However, Duarte has yet to tell his extended family from his home country: Brazil. “I have no idea how they would react to it,” Duarte said. “I don’t see them often enough to feel like I need their approval. My parents and my sister support me and that’s all the approval I’ve ever needed.”

Not being out in high school was frustrating for Duarte in many ways. “It was so difficult to be myself without it being obvious that I’m gay, even though a few people still assumed so based on stereotypes,” he said.

Duarte also feels that Johnston has a strong stigma against the LGBTQ+ community, making it difficult for people to be open about their sexuality. “I was afraid of being judged and criticized even more than people already are judged at JHS,” Duarte said.

Ever since he moved to college, he has been able to be a lot more open with himself and his friends. “I don’t have to hide who I really am from the people around me,” Duarte said. “I have a lot more self-love, self-respect, and I am a lot more confident as well.”