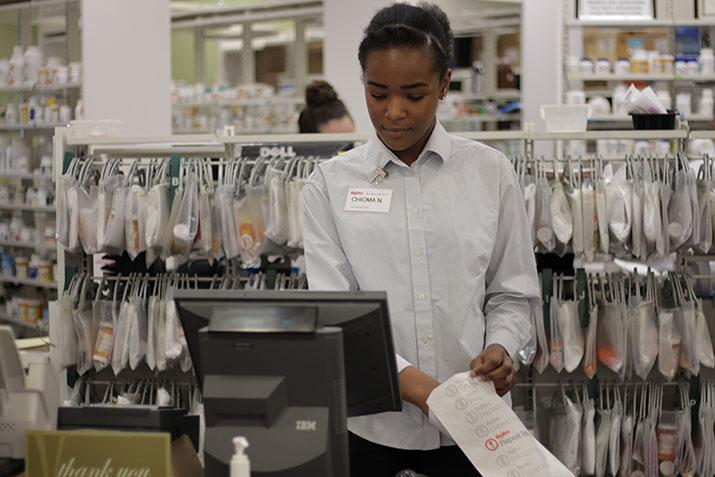 Chioma Nwizu ’17 prepares a prescription for a customer. She interns at the Johnston HyVee pharmacy.

Chioma Nwizu ‘17 is a paid intern in the Johnston HyVee pharmacy department. She is currently a registered pharmacy tech trainee, so she can do most of the tasks that a pharmacist does excluding finalizing orders and putting things on shelves, among others.

Even before taking School to Work, Nwizu was considering going into pharmacy. “Pharmacy is definitely up there on my top three of what I wanted to do after college,” she said.

Interning at a pharmacy is demanding, but Nwizu enjoys it. “It’s fast-paced and you don’t really know how fast time is going, which is really nice because I really enjoy being there,” she said.

Nwizu said working in the pharmacy is a group effort. “We all take turns doing different things,” she said. “If the pharmacist needs us to help her do anything we’ll help her do it, and it’s like a big system.”

Nwizu is the youngest person working the in the pharmacy, but she does not feel like she’s treated any differently. “It’s not really weird, it’s kind of just, ‘Oh you’re new, you’re younger, we kind of need to teach you’,” she said.

It’s fast-paced and you don’t really know how fast time is going, which is really nice because I really enjoy being there.”

There are also interns from Drake working in the pharmacy, so although Nwizu is a few years younger, they share a similar experience. “It’s kind of a learning experience for the (Drake) interns and me because we’re all trying to pursue pharmacy, and since they’re already in the pharmacy program I get the opportunity to ask them questions.”

Interning at HyVee has opened some doors for Nwizu.“[HyVee] said I could work [in the pharmacy] during college and after college if I wanted to,” she said.