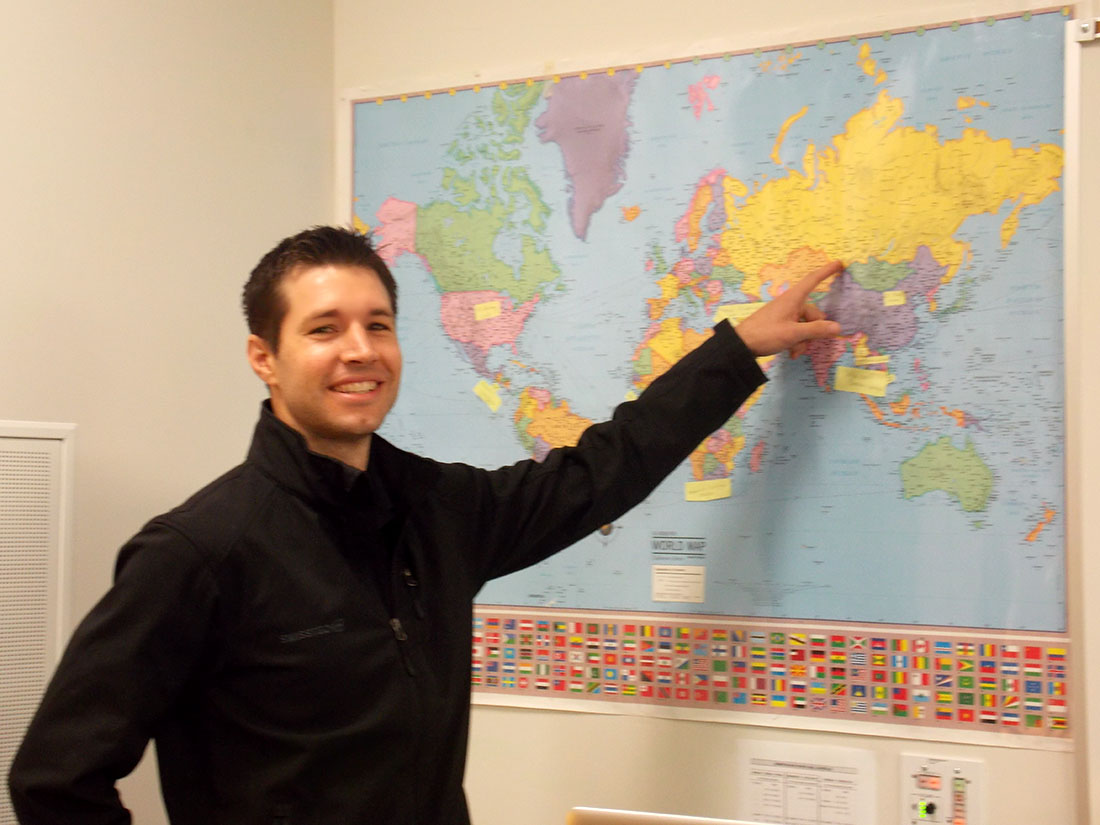 Dale DeJong, one of the two new World Studies teachers, points to a map in his room. DeJong worked at the middle school prior to coming to the new high school

Dale DeJong teaches world studies. He grew up in Orange City, Iowa, and went to college at Northwestern, where he played basketball for four years. He is currently getting his master’s degree. What attracts him most to teaching is being able to be a part of and impact kids lives, the thing he likes about high school is developing students and getting them ready for college.

DeJong has been teaching for eight years. He taught in Columbia for two years at an international school, and in Japan for two years as well. He taught Topics of History last year at the middle school. DeJong loves seeing his old students here at the high school, and looks forward to their futures and seeing what they’re going to accomplish.

“It’ll be a very special kind of year when this tenth grade class graduates, because I had them first as freshmen and that first class is always kind of a special class,” DeJong said.

Last year, DeJong coached eighth grade football and track. This is his second year coaching high school basketball. He also was part of the coaching team in Columbia, and he was the head basketball coach at the school he taught at in Hiroshima, Japan.

DeJong’s father was also a teacher. The biggest impact he had on DeJong was helping him see that there are a lot of things going on in kids’ lives. This gave him a bigger appreciation for his father and his father’s job. He also learned to value his students’ intelligence. He chose to teach history because of his appreciation for humanity’s development over time.

“History is looking at how human beings interacted within their environment and there’s a theme: continuity and change,” DeJong said. “Human nature predominantly stays the same at the same time it changes depending on the environment they’re in and the circumstances they’re in, and seeing that change is really fascinating.”

One of DeJong’s beliefs is that history can be used to help society progress.

“One thing I tell all my classes is as we go, move forward into a more multicultural world, understanding differences, different cultures, cooperating within the own multicultural set up of the United States as we’re becoming more diverse, even more diverse here at Johnston,” he said. “The history matters what has happened in their past has impacted them and how they view different things, so we can use history to live in a more harmonious society.”

DeJong has enjoyed the new building so far.

“All the stuff here is just nice and seeing the kids walk in with smiles, it’s just fun,” he said. “Beginning of the year, as a teacher I love summer, but the first couple of days of school seeing all the kids seeing all the positive energy really gets me motivated and energized and realize why I have a passion for teaching.”