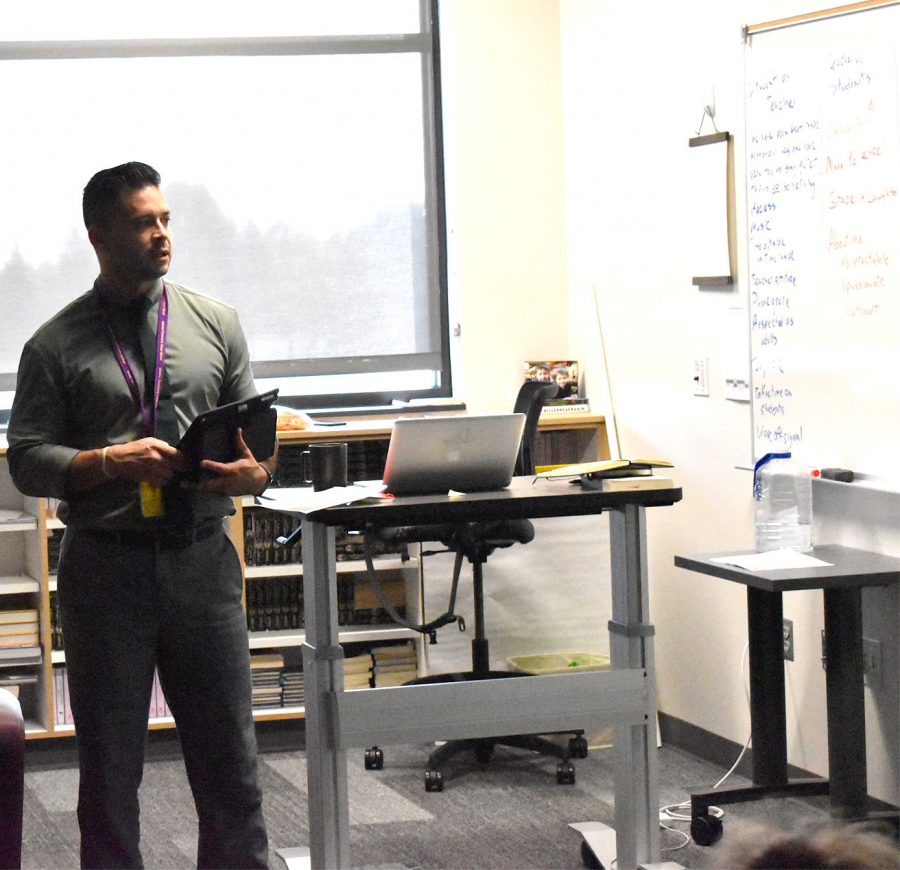 Gallery|6 Photos
Erik Dominguez presenting about how everyone’s differences make them unique and important to society.

Erik Dominguez is a new teacher who has recently arrived at Johnston. “As soon as I arrived, and even before so, even I had connections here,” Dominguez said. “Johnston has a long reputation of high standards and excellence which was a major factor.”

Though Dominguez may be a new teacher to the high school, he isn’t new to teaching. He has had years of experience, both around the United States and in Iowa. He isn’t intimidated by the sea of new faces and welcomes the unique classes that he is able to teach.

Dominguez has had plenty of teaching experience. “This is my 17 year teaching,” Dominguez said. “I’ve taught in Arizona and Waukee as a Spanish teacher.”

While Johnston may be a large school, he has enjoyed some of the systems that have been implemented here “This is the first school I’ve been to that has one to one technology and I see its advantages, especially in efficiency,” Dominguez said.

He also points out a large difference between the schools he has been to and here; there is a large emphasis on connections. “The encouragement to connect with students has been great,” Dominguez said. “Staff members greeting students at the doors, conversations on connecting with students, which is something I’ve never seen on an institutional level.”

Dominguez has enjoyed the advantages of freedom in choices. “Sophomores take ILA, but juniors and seniors have thematic options for literature classes,” Dominguez said. With these advantages, there are struggles. “I’ve been pretty honest with my classes,” Dominguez said. “There’s a lot of trial and error; I’m trying to find out what works best for me, and what works best for them.” He also strives to make his class unique and engaging. “You may see me in the halls in strange clothes,” Dominguez said. “I always strive to make class entertaing. Brains crave novelty, and I strive to give students that at least once a week.”

While Dominguez may be a new teacher, he has learned to adapt and enbrace the culture of the school. Dominguez is constantly seeking for ways to become a better teacher for all of his classes, tailoring how he teaches for each group of students, and embodying the movement towards flexibility and personalization for the student population.