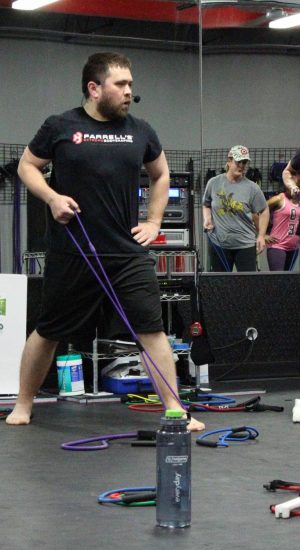 Science teacher John Chai instructs strength training once a week at Farrell’s eXtreme Bodyshaping and at times subs in for kickboxing. One of the big reasons Chai instructs there is so he is able to go to the gym on a free membership. Recently Chai has been running at a different gym or going outside instead of going to his regular gym for workout. “It didn’t take long for my boss to call me out on my poor attendance, so it helps hold me accountable so I can’t be lazy and take time off,” Chai said.

Money is less of an issue for Chai. “I think I get paid seven dollars after taxes,” Chai said. “It’s definitely not something I use to be financially stable.” Chai doesn’t think of it as a job, more of a hobby.

Time constraints can be a problem at times, however. “If there’s something I have to work on here on a Thursday in the evening, I have to find someone to fill in.” Chai said.

The job works out well with the times for his and Beguhn’s schedules. Both of them are physics teachers, and their days for working second jobs compliment. If kids need to stay late, they can tag-team on different days.

Some kids from class have asked Chai about where he works so they can all go visit the gym in a group. So far that hasn’t happened yet. “There are a couple high schoolers there, but it’s on the south side so it’s mostly Lincoln kids that go,” Chai said.