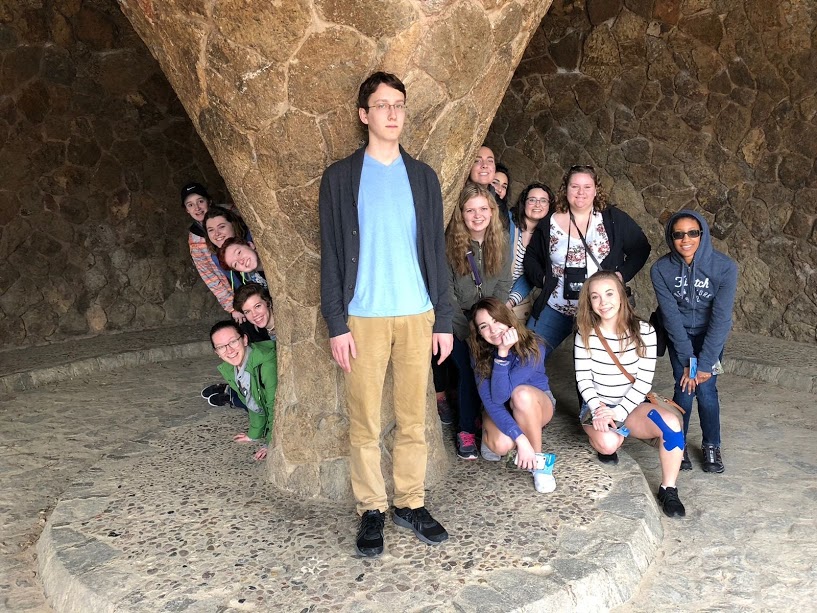 Gallery|6 Photos
Peggy Fox
Jake Atterberg ‘19 stands in front of a column in Park Güell, while the rest of the group stands around him. “ I felt like me being with only girls on the trip wasn’t bad at all, however I was used as the butt of a large number of jokes because I was the only guy,” Atterberg said.

It is a year of new beginnings and the Spanish department is jumping on board with its newly offered trip to Spain. The trip is not the typical vacation with an itinerary that solely consists of museums and tourist attractions. This 11 day trip is focused on students having both a cultural and educational experience.

“For the first half of the trip we are just going to be traveling to museums in both Barcelona and Madrid,” Spanish teacher Peggy Fox said. “The second half of the trip, is going to be the home stays, that’s going to be very different from a trip you would go on with your family and friends. I think that is where a majority of the learning will occur.”

Many of the 14 students that are traveling on this trip have some concerns. Kiersten Bahr ‘19 is especially nervous for the home stays part of the trip. “I’m nervous about staying with my [host] family because I don’t know them and they don’t much English. [This means] I’ll have to speak only in Spanish,” Bahr said.

Katherine S ‘18 had similar sentiments. “I guess [I’m nervous about] what everyone is nervous about, which is staying with their host family and having to use Spanish all the time and not when you just feel like it.” Katherine said.

While the students have some concerns, they are mostly excited about the experience they are going to soon embark on. “We will be going to a lot of royal palaces, museums, and buildings that are very old in comparison to literally everything in America,” Katherine said. “But to be honest, the thing I’m most excited about seeing is the stores. I want to go shopping in Spain.”

Bahr is anticipating the tourist stops.“I am most excited for the events we are doing, like the soccer stadium in Madrid and some of the museums,” she said.

Katherine elaborated further, “I know a lot about my host family so far, the mother’s name is Maria, she works in the cleaning industry,” Katherine said. “The father’s name is José and he is a truck driver, and the daughter is 15.”

The Spanish teachers stress the importance of students using this opportunity as a learning experience. To ensure that students pay attention to their surroundings cell phone restrictions were put in place. “During the day when they are out and about and especially when they are with their host families they need to consider their phones are cameras only,” Fox said. “That is going to allow them to enjoy the experience around them versus having their nose on their phones.”

The students aren’t completely banned from using social media on the trip. They are allowed to use their phones at night, when their activities are done for the night. Katherine thought that the cell phone policy was reasonable. “I did not have any problems following the cell phone policy, ” she said. “When we were in a group we did a lot of walking and moving around so it was very inconvenient to be on your phone. There was enough to see that I didn’t really want to be on my phone.”

Katherine was not ready to go home. “Pretty much every single person in the group was ready to go home, as far as I know, except for me,” Katherine said. “I really think if I could have stayed, I had made enough progress within those four days, that I could have been fluent in six to nine months. [Which is] not as incredible as it sounds, once you actually go there and use the language often it is easy to pick up.”