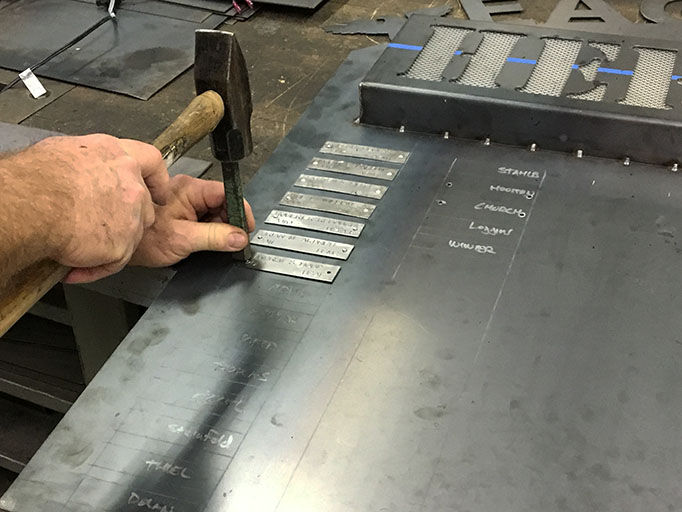 Teacher Mitch Eagles works on nailing Andrew Houp ’11, who joined the US Air Force. Eagles and his students started the project in late 2015.

Eagles began this project in late 2015, after having a conversation with his students about his former students who have gone into the military. The more Eagles thought about it, the more he realized there were many students that went into some form of public safety. He came up with the idea to honor the students he knows with a plaque with their names. After a lot of brainstorming, he came up with the name Eagles’ Heroes. “It was perfect,” Eagles said. “They are heroes in my mind.”

With the help of his students, the process to make Eagles’ Heroes was on its way.

Starting with Cody Church, ’16, he sketched out how the plaque should look. Using Autodesk Inventor, he designed every detail of the board all on the computer. He was precise with every line to make the right shape, with Eagles’ approving each step.

Church, who is on his way towards working for the U.S. Navy, hopes that the plaque will convince students who are doubtful in the public safety system, that not all cops are bad.

“This shows those people that they aren’t all bad because it tells them hey you were friends with that cop or soldier in high school,” Church says. “They weren’t bad or racist then so what makes them more likely to be now.”

The backboard will rust as time goes on, but the rectangular metal nametags were spray painted with clear paint to allow them to stay bright and shiny on the contrasting metal board. This makes the names of those serving.